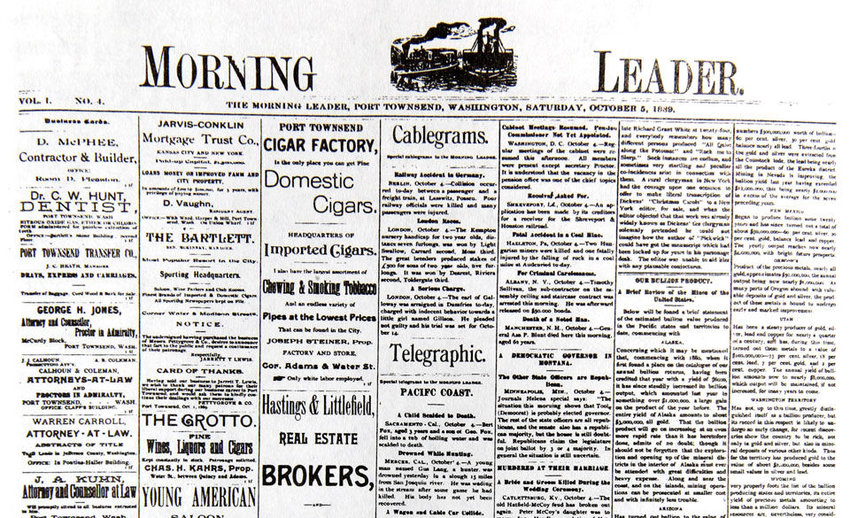 W.L. Jones launched Leader in 1889; one of many Port Townsend papers

When W.L. Jones launched the Morning Leader in Port Townsend on Oct. 2, 1889, the streets of the city were already crowded with newspapers.

The first came in 1859, followed by several others: The Northwest, the Message, the Argus, the Democratic Press, on and on. Most papers were sponsored by political parties.

The history of newspapers in Jefferson County is generally rambunctious, but the story of one editor, Henry L. Sutton, takes the cake.

In 1867 Al Pettygrove, son of pioneer Francis Pettygrove, founded The Message, a Republican newspaper. In 1869 Enoch S. Fowler purchased the paper and installed Sutton as editor.

That was a mistake.

Sutton got in fights, usually verbal, with many people and soon was fired. He shifted from newspapering to something more respectable – operating a saloon on Union Wharf. In 1877, a man he did not like from a previous dispute walked into his saloon. Sutton pulled out a pistol and shot the man point blank. He was arrested but escaped and was never recaptured. Later a letter came to the Jefferson County sheriff asking him to take care of Sutton’s dog. Some say he was eventually killed in a gunfight in Arizona.
Dark side of boosterism

Things in the newspaper world had settled down a bit by 1883, when W.L. Jones helped Allen Weir publish the Argus. But when Weir became Washington’s first Secretary of State in 1889, Jones left the Argus and launched the Morning Leader. A one-man daily, it started a month before Washington’s statehood, which Weir was busily organizing. The Argus closed soon afterwards.

Under Jones, the Leader leaned toward the Republican party and lay prone before boosterism and economic development, constantly touting the undeniable certainty of the coming great city. In the first edition he said the city would grow to 12,000 people within two years, called for the development of coal mines and an enlarged electric plant, demanded that the state agricultural college (now WSU) be located here and challenged local investors to put up hundreds of thousands of dollars for a fine new hotel, which he promised would send property values soaring by 30 percent.

Finally, after months of being harangued, investors led by Charles Eisenbeis stepped up. Their 128-room hotel, built beneath the present Manresa Castle, was completed in the early 1890s. But the town’s economy collapsed as the last nail was driven. The hotel never opened. Several investors were ruined, although Eisenbeis survived. The huge empty building became a sanitarium in 1901 and mercifully burned down in 1923.

In the midst of this credibility calamity, Jones had a nervous breakdown, then left the city and his newspaper behind.

Winslow McCurdy became a partner in 1906, his ownership lasting until 1928. His son Richard McCurdy became news editor in 1934, co-owner in 1946 and sole owner from 1952 until 1967. Ray O. Scott and Fred Willoughby also had ownership roles between and during the McCurdy years.

An even more remarkable stake in the Leader came from the Mitton family. Claude Mitton was hired on as a printer in the 1930s and continued in that role until 1975 – 45 years. In those years the Leader did most of the job printing in the area and Claude was known for very long days. His son Terry Mitton joined on as a printer in 1959 and continued for 41 years. Combined, the Mittons devoted 86 years to printing the Leader and everything else.

Tom Camfield was taught the printer’s trade by Claude Mitton starting at the age of 15, and after college worked in the business (with a couple departures) for almost 44 years, his later years spent as a reporter and photographer. (His recollections and research form much of the research of this and other history stories.)
advertisement

In 1967, Frank and Pat Garred purchased the Leader from Richard McCurdy, and operated it for 34 years, taking it into offset printing and then into digital production. In 1989 they were joined by Scott Wilson (the author) and Jennifer James-Wilson as co-owners, and the Wilsons continue on today, 25 years later. Since 1906, there have been only five Leader publishers.

Today, the Leader is increasingly unique in the modern landscape of media and media economics. It remains an independent, locally owned, news-driven community media company even as most formerly independent newspapers have been acquired by corporate ownership. Sound Publishing, the North American subsidiary of a large Canadian company called Black Press, has purchased some 50 newspapers in Washington State, including all of the community newspapers of Kitsap, Island, San Juan and, two years ago, Clallam counties.

The Leader partners with Sound for printing and joint marketing, but remains the rare independent in this part of Washington.

At the same time, the metropolitan newspaper industry has undergone structural changes that have reduced revenues and cut expenses, especially newsrooms.

Community media like the Leader have been less affected. Readership remains extremely high – 70 percent of the households of north county are Leader readers. The Leader never had the national advertising dollars that fled daily newspapers. As a strictly local newspaper the Leader’s business focus is the local business community.

At the same time, the Leader is a leader among peer community media in both sustaining a strong commitment to independent news and developing robust digital news and marketing. It was the first media company of any size in Washington State to launch a newsroom-based website, in 1995. The current ptleader.com is digital source of daily news, with many other features for subscribers, and draws 20,000 unique visitors per week. The Leader marketing staff is expert in print and digital outreach, using a toolbox that now includes website construction and upgrades, setting up social media platforms, web-based advertising and many other print and digital marketing outreach tools.

The Leader’s values are organic to this area, 125 years after W.L. Jones brought his newspaper into Jefferson County’s morning sunlight: In touch, in depth, independent. 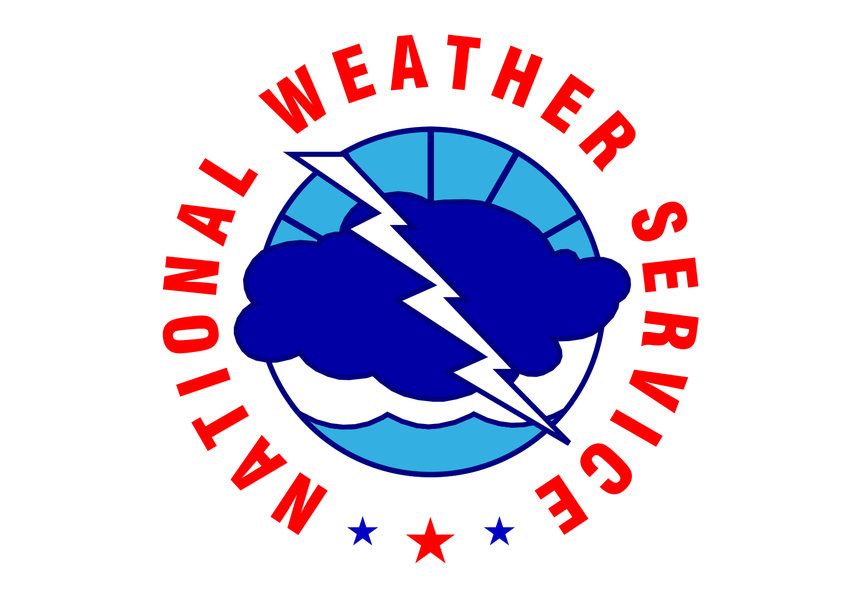