It’s all starting to click for the East Jefferson Rivals girls soccer team.

The girls left Memorial Athletic Field Tuesday night with a dependable performance to be proud of, earning their … 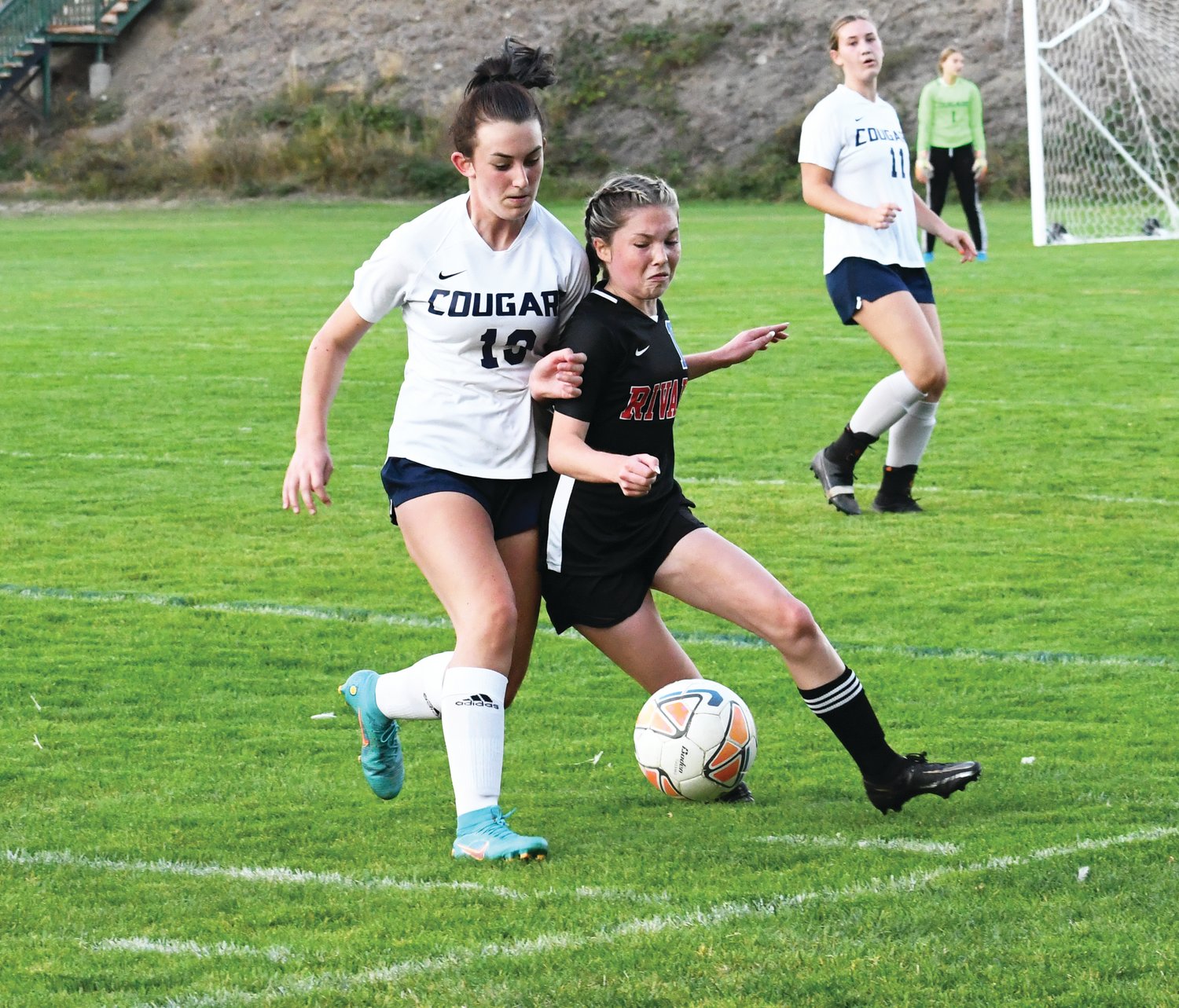 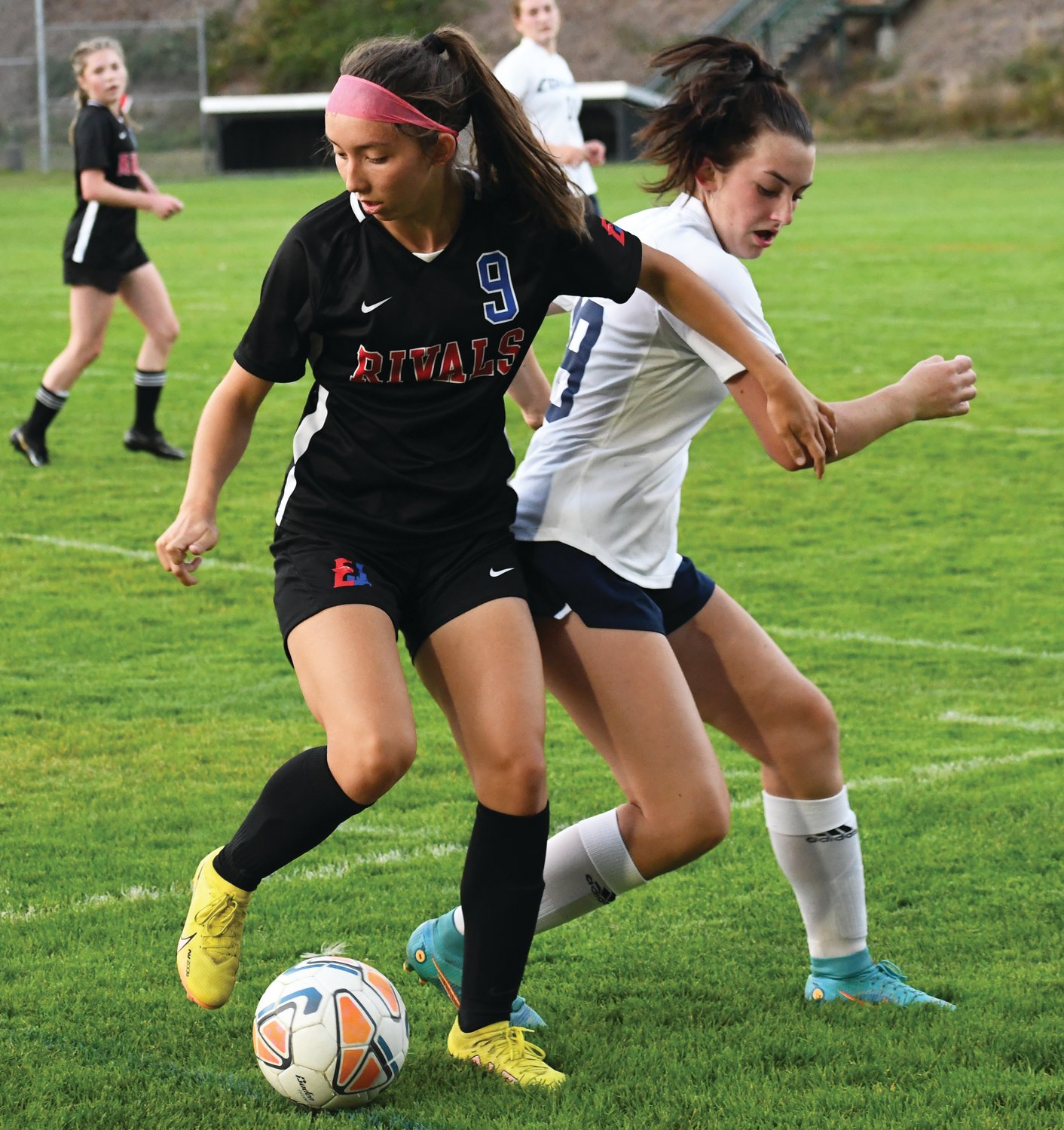 Senior striker Kaylen Pray cuts inside before passing upfield in the second half.
Leader photo by James Sloan 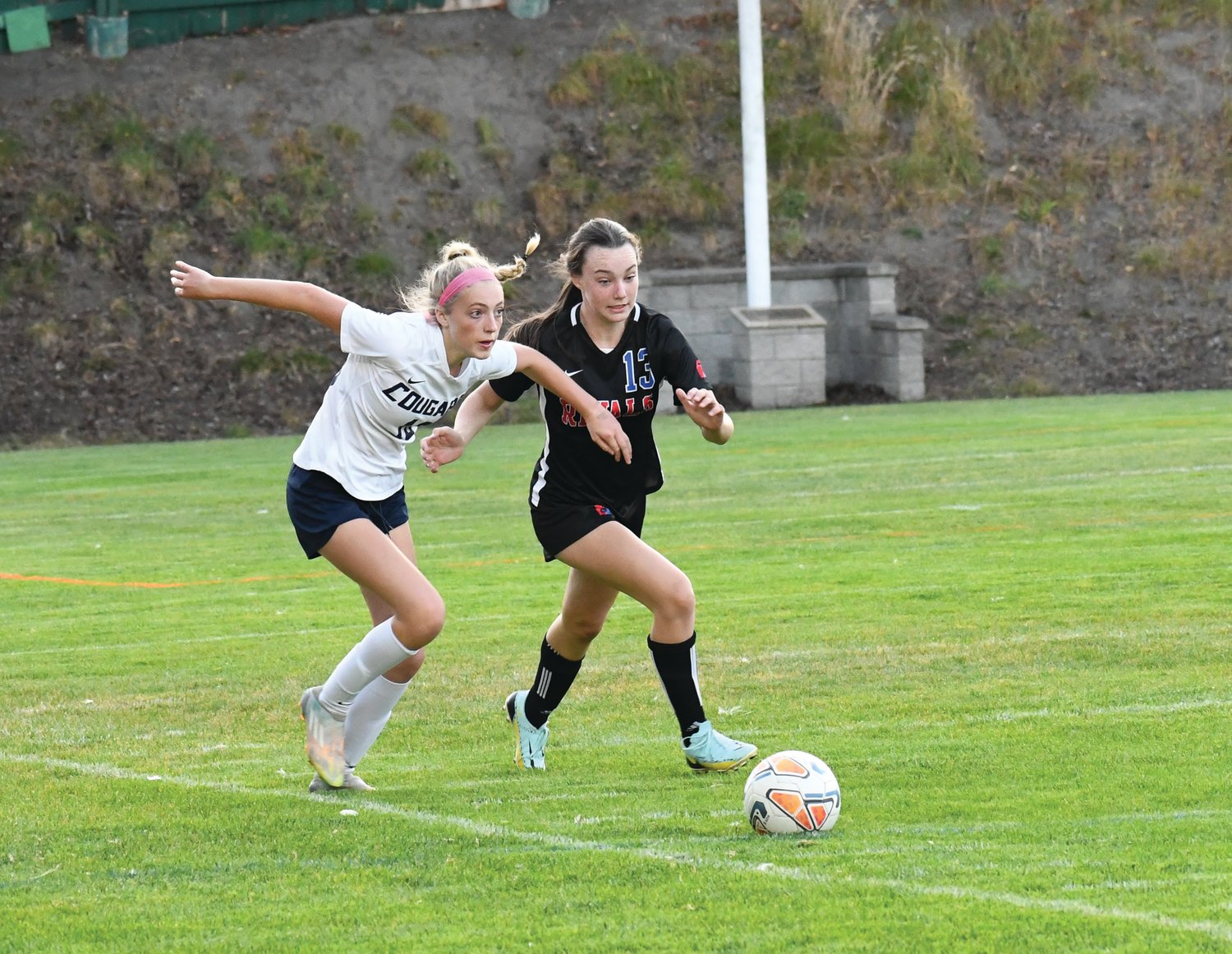 It’s all starting to click for the East Jefferson Rivals girls soccer team.

The girls left Memorial Athletic Field Tuesday night with a dependable performance to be proud of, earning their first victory of the season against Cascade Christian High School.

“It’s really big. We felt like we should’ve had one or two already,” EJ Head Coach Robert Cantley said of the 4-1 win.

After receiving two draws and a loss despite looking the better team for two of the last three games this year, the Rivals were hungry for a victory.

They were missing midfield mainstay and senior captain Iris Mattern due to injury, but it didn’t take long for EJ to pick up the pace and feed the ball to senior forward and leading goalscorer Kaylen Pray.

Filling in for Mattern in midfield, senior Leah Harrison made an immediate impact on offense after back-and-forth passing with Pray left a fast break opportunity for the forward. Pray laced a shot low and to the left, but the ball went wide at the three-minute mark

The Cougars responded with a shot of their own, but freshman keeper Tayla Davis’ scoop-and-save effort kept Cascade Christian at bay.

Catching EJ off guard early on, the Cougars pounced on an opportunity at goal and booted a shot on Davis’ net. The keeper made a lunging save to keep the high shot out of the netting, but the rebound effort sliced through to put Cascade Christian up 1-0 with 25 minutes left in the 40-minute half.

It didn’t take long for EJ to answer back as a quick cross floated to Pray in the Cougars’ box and she tapped it in to make it 1-1 a minute after the opponent’s goal.

For the rest of the opening half, the two teams split possession with few proper chances at net.

That is, until senior forward Natalie Zavalza looped a pass to Harrison right in front of the Cougar goal, and Harrison buried a shot into the netting to bring the Rivals ahead 2-1.

EJ continued to up the pressure and earned a prime chance at net from another fast break effort by Pray. With four minutes until half, the senior striker used her pace to crash through the Cougar defense. Cascade Christian’s keeper sprinted out to collect the ball before Pray could shoot and the two clattered together with the keeper winning back possession.

The halftime whistle blew and the Rivals entered the locker room with a one-goal lead.

EJ took control of the second half by pressuring the Cougars on all ends of the field. Senior center back Isabel McCracken, junior Ava Shiflett, and freshman Sienna Emerson were key parts of the push as sophomore Mi Amada Lanphear Ramirez, Botkin, senior Shelby Thibeault, and others anchored the back end and kept the ball out of EJ’s penalty box.

The pressure paid off as EJ halted the Cougar offense for most of the second half. Shiflett’s weaving runs through midfield put Cascade Christian’s defense on skates while Pray’s pace kept the Cougars on their heels for most of the matchup.

Stifling any chance for a late Cougar comeback, Pray darted down the right side for an open shot at goal with two minutes left in the game and glided a well-placed strike past the keeper as EJ went up 3-1.

Adding on one more for good measure, Shiflett collected a pass in Cascade Christian’s penalty box, battled with a couple defenders for possession, then tapped a slow-rolling shot past the keeper to make it 4-1 in stoppage time as the match closed out moments later.

“I did not think that was going in, but I pushed through,” Shiflett said of the shot.

Yet again, EJ’s potent offense propelled the squad to victory while the much-improved defense held the Cougars to a single score and looked comfortable throughout.

“It was really fun … We used different formations, we had three back, so our center-defensive midfielder plays back, so it worked really well and we’re all connecting our passes,” Botkin said of the back line and overall performance.

“Overall, I was pretty happy with the performance. [It was] another two-goal lead that we almost lost, so I was happy that we were able to maintain it and pull it out at the end,” Cantley said.

“We were without one of our most important players [Iris Mattern], so everybody had to really step it up,” he added.

The coach highlighted some of the athletes that he was impressed with, starting with top goal-scorer Pray.

“She’s obviously important as one of our forwards being able to put the ball in the net for us. She’s got speed, so defenders are worried about her,” Cantley said. “It’s great having a player like her. I don’t quite know what we would be doing without her right now.”

“Leah Harrison, she had to fill in the role that Iris would’ve normally been playing, so I feel like she was doing a pretty good job trying to fill those shoes,” Cantley added. “Of course Izzy [Isabel McCracken] at the back, being the senior caption of the defense and most experienced one back there just holding it all together and making some important plays.”