Lord, what fools these mortals be!

Escape the cold into a fantasy world of fairies, dukes, and fevered love.

Lord, what fools these mortals be! 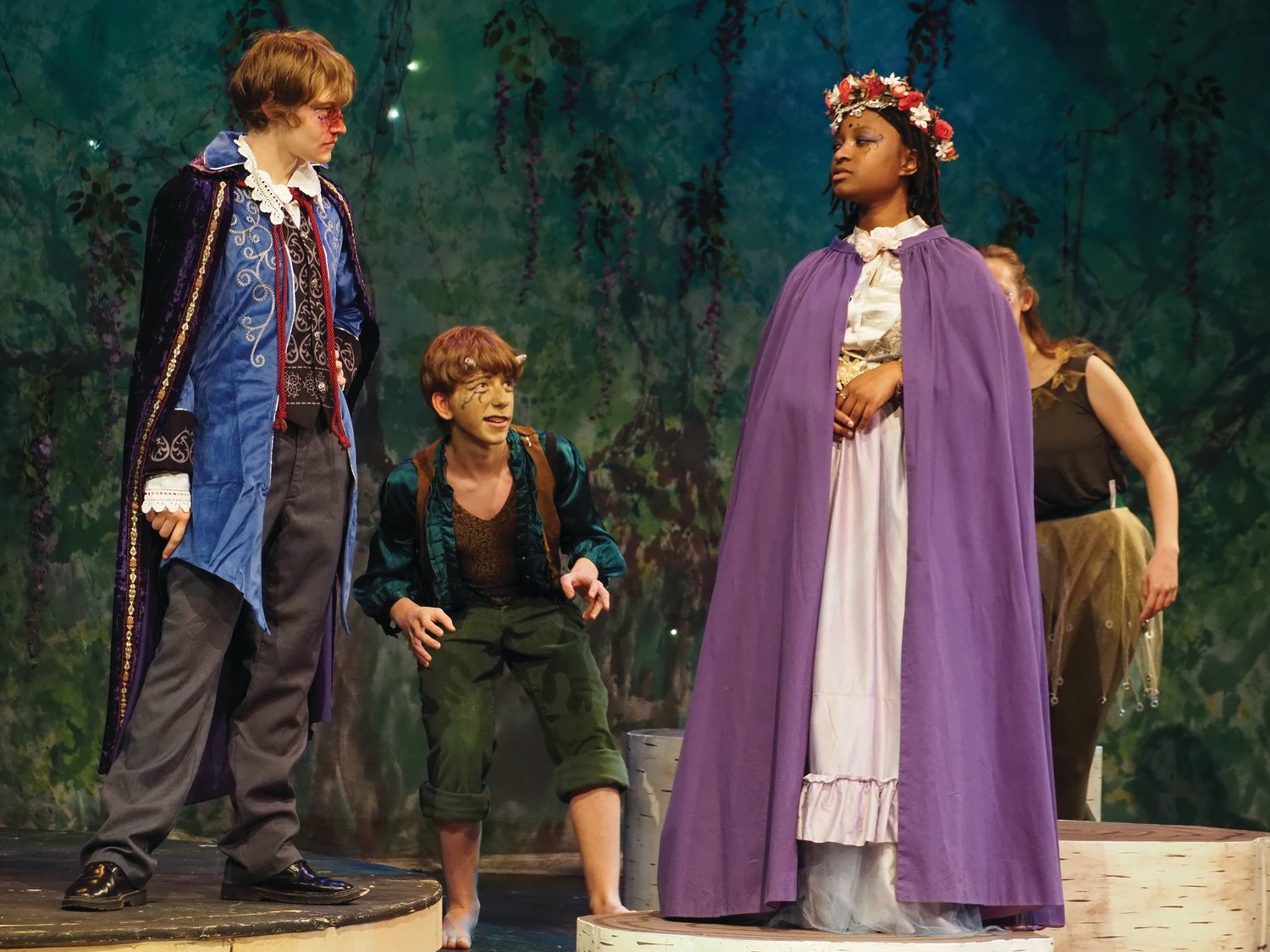 Senior Sophia Huber at left in the role of Oberon the Fairy King, locks eyes with the Fairy Queen Titania, right, played sophomore Rain Varnie, while sophomore Peter Sanok as Puck plays between them.
Leader photo by Derek Firenze

The entire cast got a chance to try on their characters’ costumes and strut their stuff on the stage for a moment before rehearsal on Monday, Oct. 31.
Leader photo by Derek Firenze
Previous Next
Posted Wednesday, November 2, 2022 9:38 am
Derek Firenze
dfirenze@ptleader.com

Escape the cold into a fantasy world of fairies, dukes, and fevered love.

The same schedule will be followed for the second weekend, Nov. 11 through Nov. 13.

Love goes up, down, sideways, and diagonally in this classic comedy due to the higher power of the Fairy King who drives the plot to ridiculous and fun ends, including transformations of physical characters as well as the three couples’ seeming fortunes.

Perhaps the play’s most memorable character is the magical Puck, played by sophomore Peter Sanok, whose mistakes create the chaos the play hinges on. This trickster fairy flits about throughout the play, requiring a fit performer.

“Peter can handle the physical aspects of the role. A lot of it is the physicality, not just what he says, but what he does,” said Chris Pierson, the play’s director. “He’s mischievous by nature and he understands the character.”

Of course, Puck is just trying to do his job, which is at the behest of his sovereign, Oberon the Fairy King, played by senior Sophia Huber.

“When we did auditions, she was Oberon. I didn’t have to think,” Pierson said.

In Shakespeare’s time, men played all the roles as women were excluded from acting, so to have Huber — who so rightly deserves the role take on the patriarch of the play — somewhat balances the scales of these historical hierarchies.

Alongside the Fairy King is Titania, the Fairy Queen, played by sophomore Rain Varnie. Their fight over a “changeling” child is the spark that sends Puck off.

Huber and Varnie also play the earthly realm’s royalty, taking on the roles of Duke Theseus and Hippolyta.

To make it work, they have to do a little theatrical magic.

“There are a couple slights of hands we have to pull and little scenes we have to add and music for costume changes,” Pierson said.

Below the royalty and fairies, there are the lovers played by junior Mae Glerum, senior Ivy Hill, junior Ahwrey Smith, and senior Riley Gregg. The theme of choice in partners is key to the play, the development of Shakespeare’s later work, and for the evolution of Western culture.

As part of the production, they tried to show how these young women stand up for themselves at a time when to do so was difficult in different ways than it is now.

“The girls are speaking sense and talking back to power or to their loves,” Pierson said.

Finally, at the “Bottom” of this social order are the Athenian workers who are trying to develop a play for the Duke’s wedding, and the results are arguably some of the most memorable comedy in all of Shakespeare.

Also, five dancers from the Port Townsend Ballet School will be joining the fairies in their mischievous happiness and celebrations.

Pierson chose the play for its fun and ability to delight, saying he believed those things are what the community needs as people come out of the dark times of the pandemic, considering this is the first play the high school has been able to stage for the public in more than two years.

“I really hope the community comes out to support the students and get some unity back with the community and the high school,” Pierson said.

“I hope people show up, that’s the main thing for the students and the work they’ve put in.

“I’m really proud of the students,” he added.