The Port of Port Townsend got farming advice straight from the horse’s mouth at the Chimacum Grange last week. 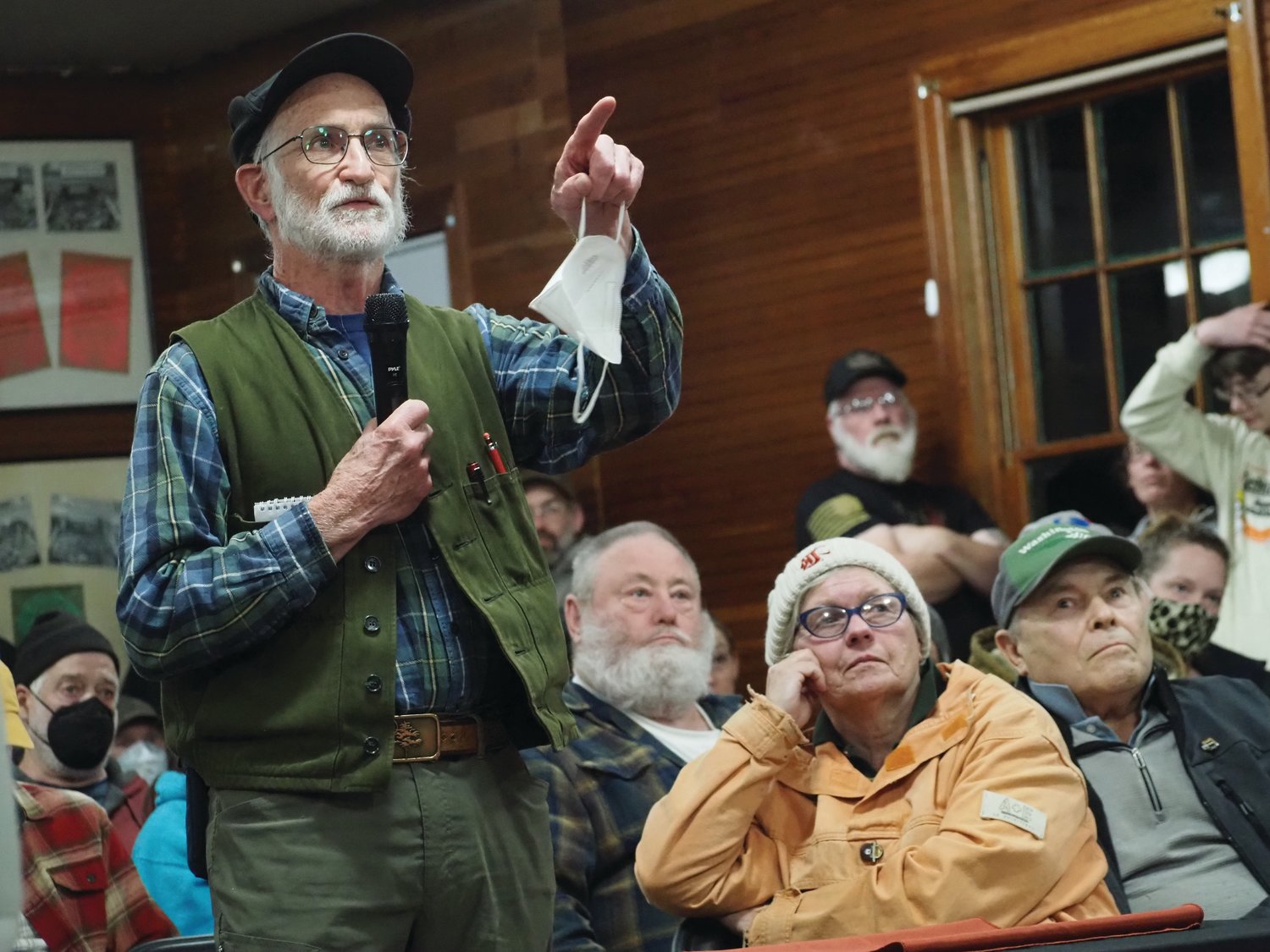 Al Latham, chair of the Jefferson County Conservation District as well as Chairman of the Chimacum Grange Board, voices his support for the port’s purchase of the farm.
Leader photo by Derek Firenze
Posted Wednesday, January 25, 2023 2:17 pm
Derek Firenze
dfirenze@ptleader.com

The Port of Port Townsend got farming advice straight from the horse’s mouth at the Chimacum Grange last week.

Opinions on the port’s intent to purchase the Short’s Family Farm drew a range of support and criticism at the special business meeting Jan. 17, mostly split along the lines of more or less established agricultural workers, as well as ideas for how the site could be used should the purchase go through.

The idea of farming isn’t something new to the Port of Port Townsend, officials said.

“The port from its very inception, nearly a century ago in 1924, imagined that it would play a role in helping to support local ag. That vision has never been realized, at least not to date,” said Eric Toews, deputy director for the port.

Toews noted that agricultural support was mentioned in the port’s first comprehensive plan in October 1926.

Last October, the port announced it had entered into a non-binding “Letter of Intent” with the owners of the farm, Roger and Sandy Short, to negotiate terms and price by Jan. 28.

“This conversation really just started over the back of a pickup,” said Port Commissioner Pete Hanke of how he and Roger Short first began talks of the sale. Hanke raises beef on property near the Short’s farm.

“The thought was just, gosh, you know, this really is not going to be good if some guy from Palo Alto shows up with a check and parks the farm on the side,” Hanke said. 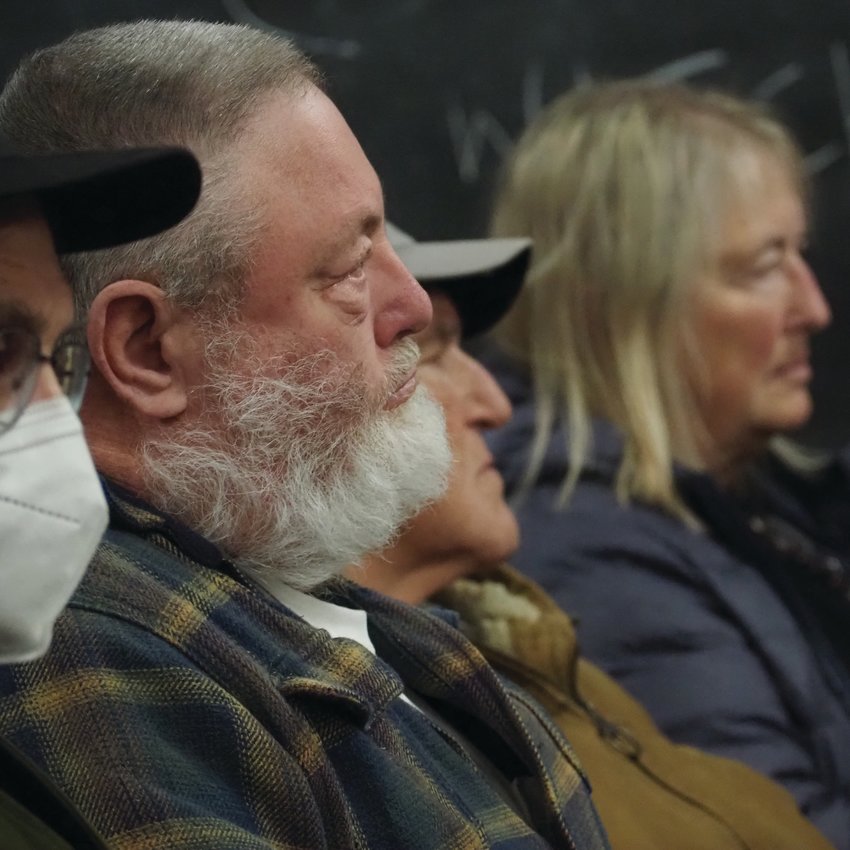 Many in attendance were concerned with the fact that the port did not have a plan in place for what to do with the property.

A PASTURE AND A PROBLEM

The farm sits on 253 acres on Center Road, making it one of the largest privately held contiguous pieces of agricultural land in Jefferson County. It must stay that way in perpetuity because of a conservation easement the Shorts signed in 2016 managed by the Jefferson Land Trust. That agreement prevents the farmland from ever being subdivided or converted from agriculture.

As to why the port should buy the farm, port staff said they believe they are better positioned to building partnerships between agriculture, regulatory agencies, and nonprofits to help scale up local agricultural production in part by correcting the flooding issue that exists on the property.

“We have an institutional capacity that perhaps does not exist in the private sector on its own,” Toews said.

“We’d like to be able to grow more food to serve our local community if at all possible,” he added.

Although the Short’s Family Farm is prime agriculture land, its state-recognized soils are all too often submerged.

“What are you going to do with land that’s an aqua-farm? Are you going to grow fish? No, you can’t do nothing with 100 percent of that land almost,” said fifth-generation farmer Austin Bishop.

Bishop has worked alongside the Shorts, but questioned the port’s move to buy their property.

“I’d like to see the Shorts keep it. But you guys apparently have bigger pockets than a lot of people do.” 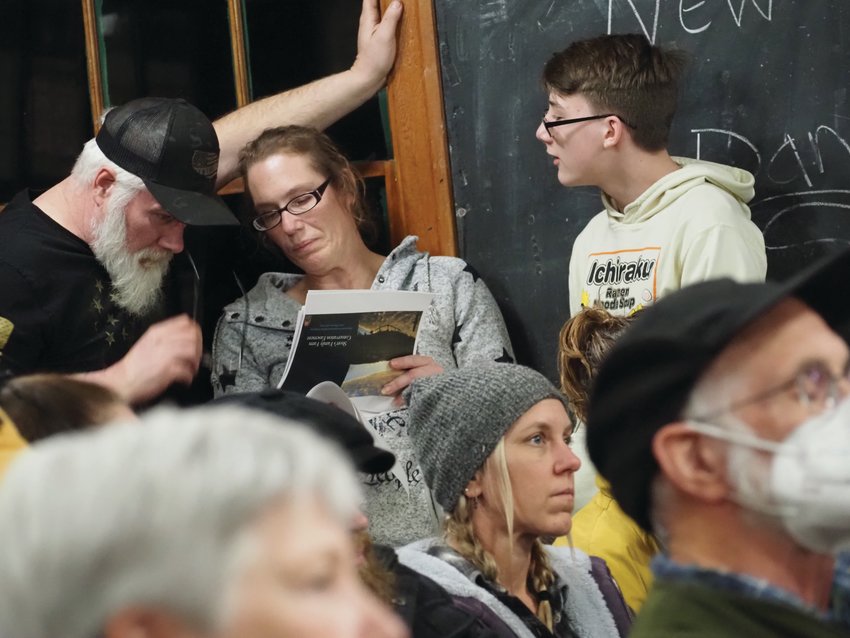 Farmers from around the area were offered an overview of the conservation easement on the Short’s farm.

TRAVERSING THROUGH THE FLOOD

Erik Kingfisher, the Jefferson Land Trust’s stewardship director for the property who had earlier given a presentation on the easement, responded to the flooding concerns.

“I like to think that we can solve this,” Kingfisher said.

“In that spirit, the county and the Jefferson County Conservation District found some money through a state grant to study this a little bit more and come up with a strategic plan around the drainage that will help find a viable solution hopefully,” he said.

In the 1920s, engineers forced Chimacum Creek into a straight line and maintained the drainage on the completely flat property on which the Short’s farm sits. But in the 1950s, that maintenance stopped and canary grass began clogging the creek.

The canary grass infestation is also an issue with some who have worked the land.

“There is canary grass that grows because the state asked us to plant it. And now the state won’t help us get it out,” said Kevin Short, who has lived on the farm since he was 2 years old.

“I’ve given my life to this property, now I have to give it up. I don’t think any of you really understand what it means,” Short added as he teared up. 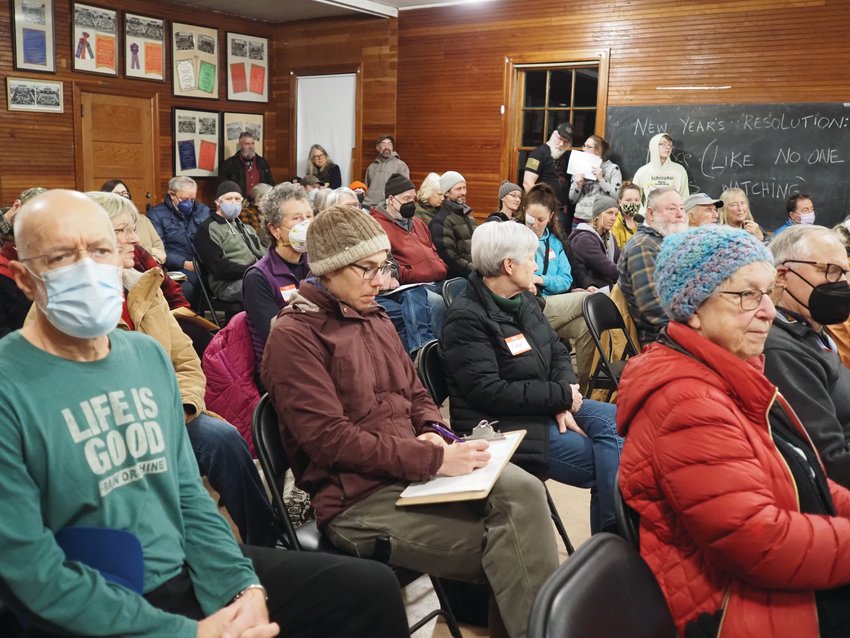 The event drew a packed house to the Chimacum Grange leaving many standing around the edges.

If the port can figure out what to do about the flooding, there’s still the question of what to do with the land.

That’s where the youth is ready to step in.

“I find that really exciting that there is no plan,” said Hannah Welch.

“As a young person in this industry with a passion and without resources, I think this is an incredible opportunity to create something unique and multifaceted,” Welch added. “That could be production, and it could be community resilience, and maybe it could meet housing needs that farm workers are currently struggling with in this area.”

That sentiment was repeated throughout the night.

“Young farmers really need land and land access. I think some of the ideas that are coming up about cooperative ownership, incubator farms, I think have high potential opportunities to make this property successful,” said Melanie Edwards, vice president of the board of the National Young Farmer’s Coalition. She pointed to the success of Port Townsend’s own Natembea cooperative farm project that preserves open space for community benefit in a way that honors its history as a family farm.

Also in favor of the port’s purchase were a representative for the North Olympic Salmon Coalition and the chair of the Jefferson County Conservation District.

“My thing is some type of infrastructure for the community so that the young farmers have a chance of getting going, whether it be cold storage so they can sell their product during the winter time, or a beef processing facility,” Short said. 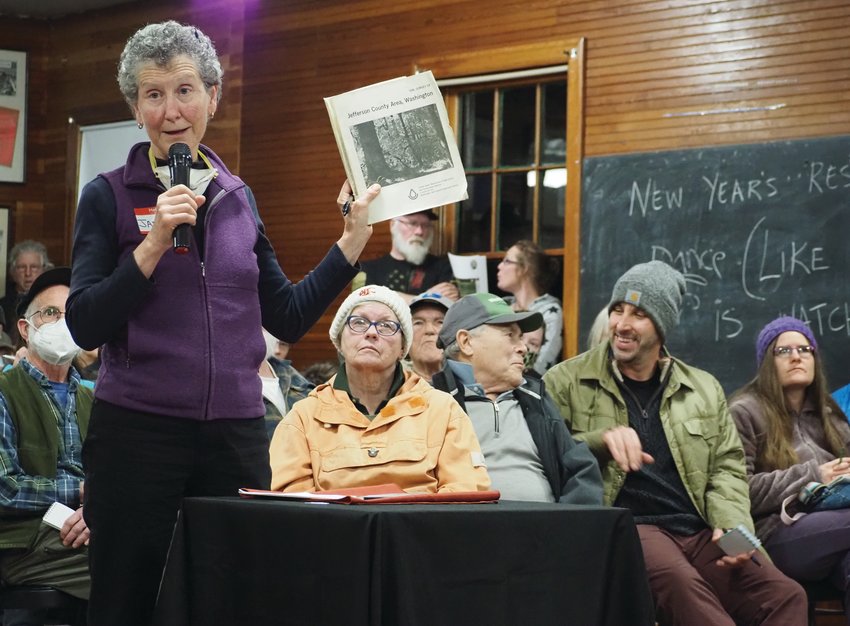 OTHER SIDES OF THE STEADING

Other seasoned members of the agricultural community were not as sure.

“Chimacum ‘Lake,’ with its king tides, is poorly suited to agricultural use,” joked Jean Ball of Gnarley Dog Farm.

“I agree with some of the concern about making some of the investment without a plan in place,” added  Martin Frederickson, who farms next to the Shorts.

“I’ve been looking at meat processing through WSU, and as a farmer, and a conventional meat processing plant is not a real, viable solution for the Peninsula. But I think that there are collaborative solutions that could make that work and I think it would be a real asset for the community,” he added.

Others were more outright in their critique.

Welch pointed to a soil survey done at the Jefferson County International Airport that showed soils of statewide significance on the port’s property.

“You’re sitting on some of the best soils in the county and you already own them. So if you wanted to support agriculture, you have the ability to do that on the property that you already own and put that money into the buildings, the processing plants, the incubator farms, the incubator farm support equipment, a co-operative, whatever,” Welch said.

“I just suggest that you back up, not make your deal on the back of a pickup truck, but actually start from the beginning and get your plan together,” she added.

Port staff will be working into overtime to get that plan finalized by deadline on Saturday, Jan. 28, Eron Berg, executive director for the port, told The Leader.

They’ll be pushed to their limit because the state-mandated appraisal on the property needed to make the deal is estimated to arrive by the end of the week, just days before the Letter of Intent expires.

“Best case scenario for a deal is early February,” Berg said at the meeting.