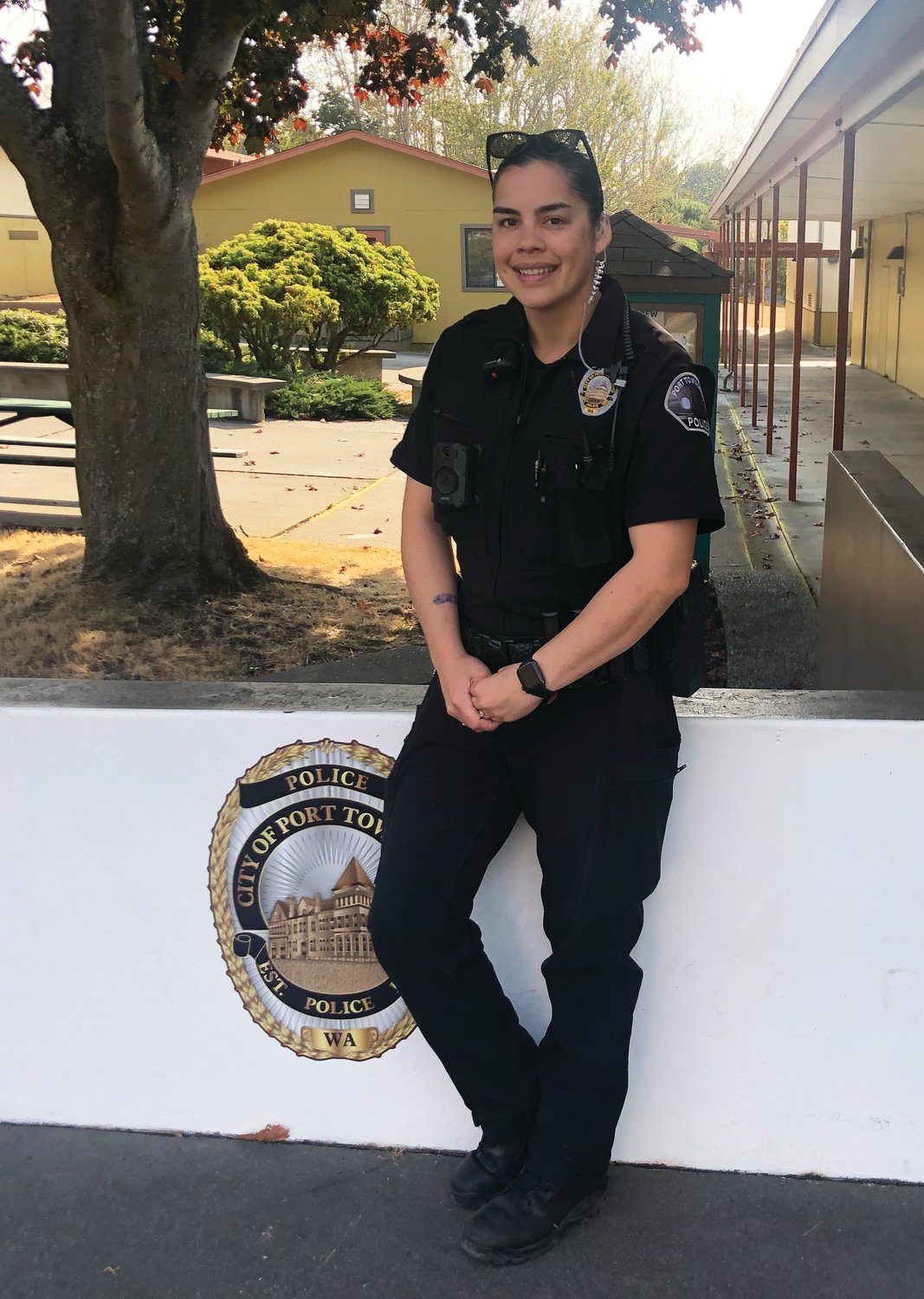 Officer JJ Smith was sworn in during the city of Port Townsend’s Sept. 19 business meeting.
Leader photo by James Sloan

Smith hopes to further strengthen the local department’s community-oriented approach to law enforcement and develop relationships with the local community.

“I’m excited to be here in Port Townsend, just the pace and the life that’s lived here is one where people really enjoy their time and that’s already been clear in the three weeks that I’ve been here,” Smith said in an interview with The Leader.

After spending five years on the force in Port Angeles, Smith was hired and sworn in during Port Townsend City Council’s Sept. 19 meeting along with new officer Trevor Hansen.

Smith enjoyed her time in Port Angeles, but the constant calls and lack of opportunity to connect with the local community left her desiring more as a police officer.

“When I was in Port Angeles is was a lot of call to call to call … and Port Townsend has more opportunities for community-oriented policing,” she said. “Being able to talk regularly with the community instead of just from calls was important to me, so that’s really what attracted me to Port Townsend was really how much happens here.”

While the Olympic Peninsula has been her home of late, Smith was born and raised for the most part in Hawaii and spent time across the U.S.  with her father in the Navy.

Her transition into law enforcement, surprisingly, was an unexpected career choice.

“It was actually a complete accident,” she said to moving to police work, adding, “not really an accident, but it was everybody else’s doing but mine.”

Smith, an avid mountaineer, found interest in the police profession after a coincidental conversation with a former park ranger.

“I was at a rock-climbing event and I was talking to a lady who used to be a park ranger, and I was telling her I was interested in maybe being a dispatcher,” she said. “Im’ pretty tech-y — I’m fast at typing — and so it was a consideration at the time.”

“It turned out her husband was Chief Brian Smith of the Port Angeles Police Department … The opportunity arose and I took it and ended up serving Port Angeles for about five years,” she added.

Smith has been able to be apart of the Peninsula community, helping the Girl Scouts, working with Port Angeles High School, and helping the Girls on the Run nonprofit in Kitsap County in recent years.

“They have Girls on the Run, which is a super awesome after-school program for young girls, and it pretty much just promotes a team mentality,” she said. “I got to run a 5K with the girls in my uniform, which was a terrible mistake,” she said, laughing.

Smith has also co-founded a volunteer-based hiking community for women that share a passion for adventuring through the gorgeous terrain offered on the Peninsula.

“I am a co-founder of a women’s hiking group called PNW Outdoor Women, and we have about 50,000 women in it now,” she said.

When she’s off the clock, odds are that Smith is outside hiking or mountaineering.

“I’ve done Mount Rainier a handful of times, and I’ve done all of Washington’s volcanoes so it’s a big part of my family life and my outside life,” she said. “We’re right in the sweet spot here on the Peninsula where we have access to literally everything and the Olympics has some gems that not a lot of people  get to go enjoy.”

As a police officer, Smith hopes to strengthen local law enforcement’s relationship with the citizens of Port Townsend, and bring community-oriented policing to the forefront.

Appraisal for Short’s farm comes in lower than expected | UPDATE

Tax levies on ballot for both East Jefferson fire departments

Jefferson County Sheriff's Log | He could be dead, not sure