Not much has changed since the city of Port Townsend targeted a popular art piece in an Uptown neighborhood for lacking permits in October.

Called the “Racoon Lodge,” the impromptu … 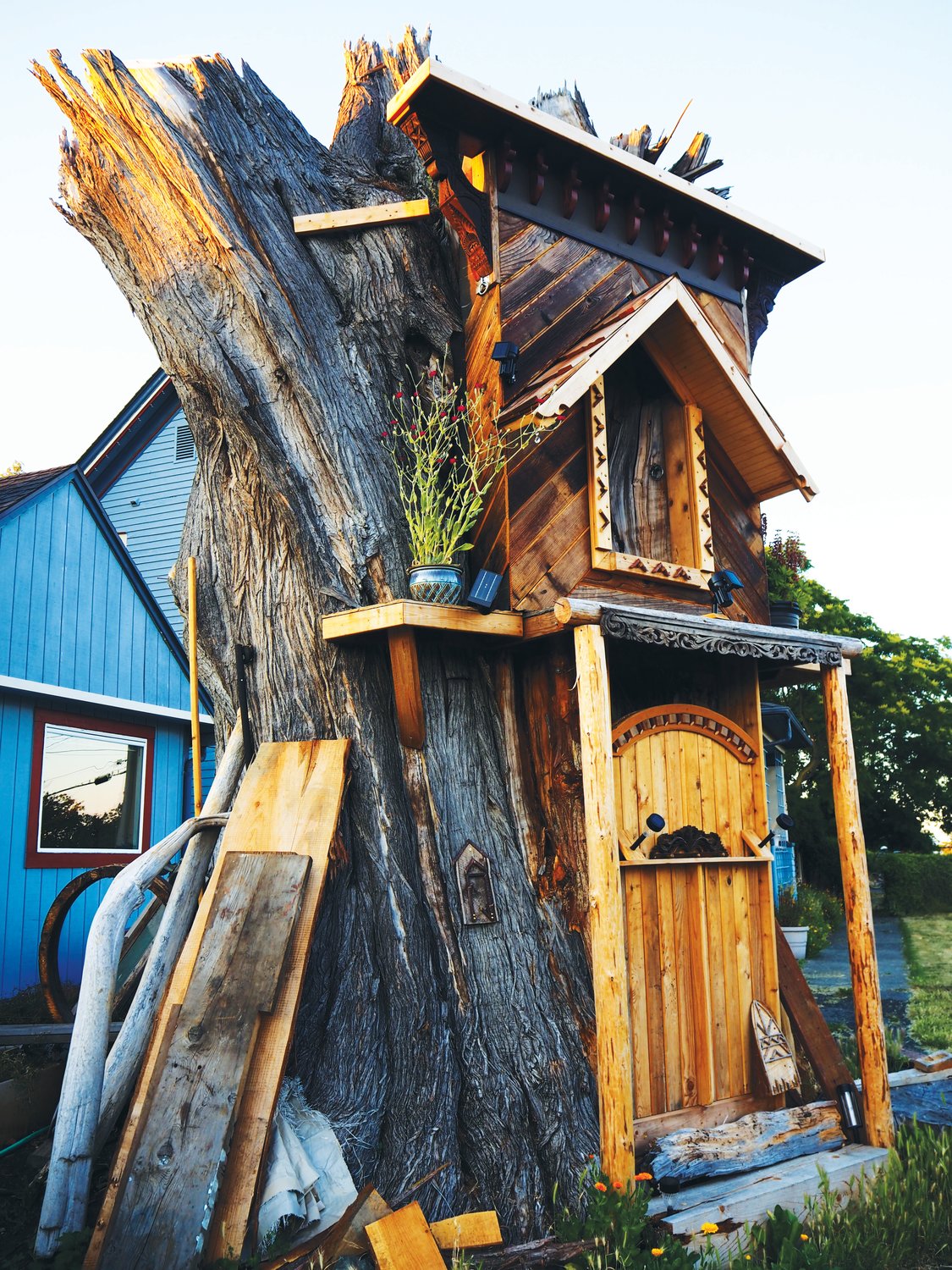 The 150-year-old Monterey Cypress tree, once the largest in Washington state, had a branch crack off years ago causing the city to deem the remaining branches too dangerous, leaving the jagged, 52-foot circumference stump behind.
Leader photo by Derek Firenze 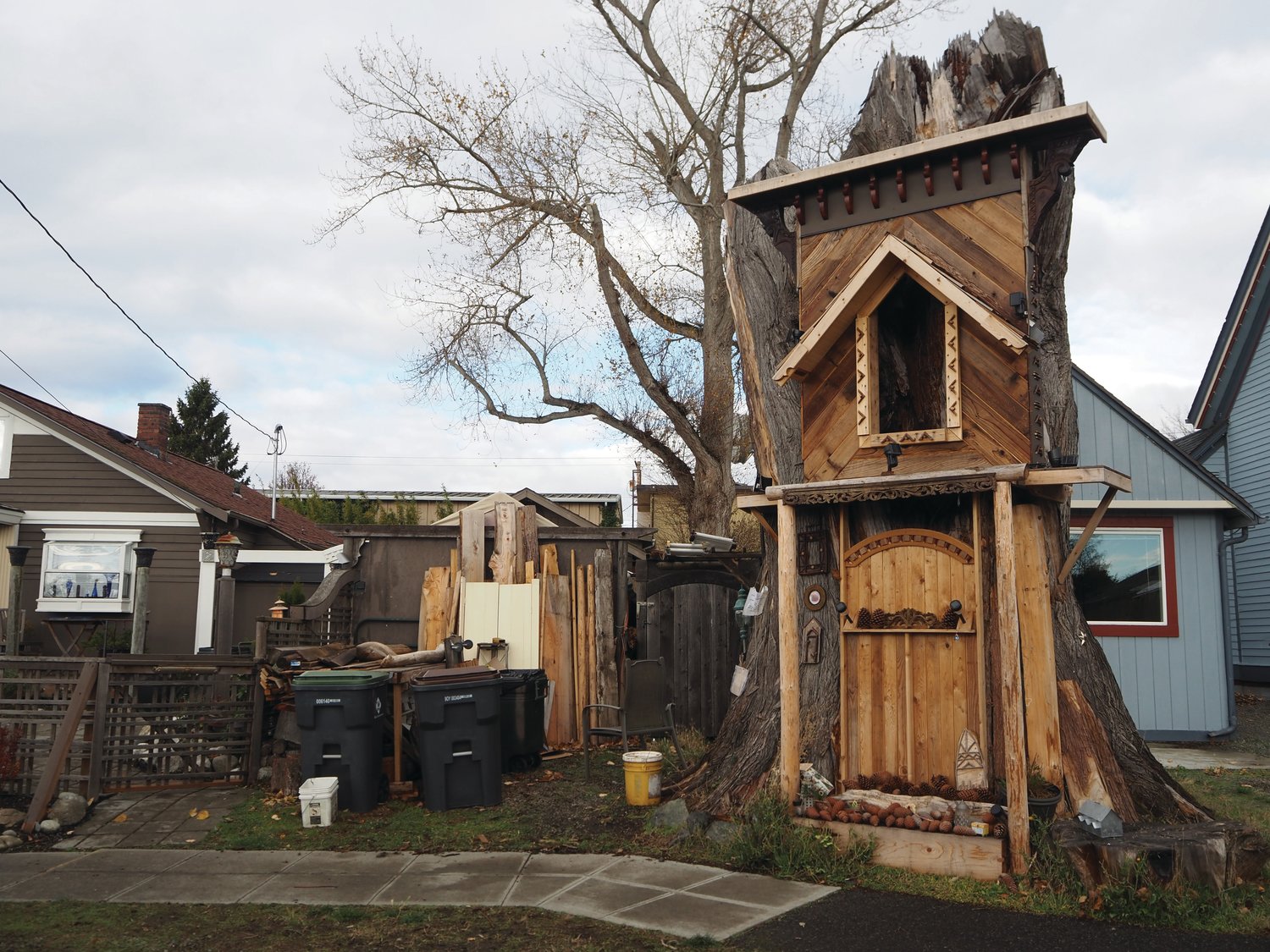 The height of the structure combined with the fact that it's built directly against the sidewalk has created code compliance issues with the city.
Leader photo by Derek Firenze
Previous Next

Not much has changed since the city of Port Townsend targeted a popular art piece in an Uptown neighborhood for lacking permits in October.

Called the “Racoon Lodge,” the impromptu artistic add-on attached to an old tree stump has been faulted by the city as a public health hazard. But it’s proven popular with residents, who have circulated a petition calling for it to be saved and have lobbed comments in support of the structure at city officials.

For Kevin Mason, the artist behind the 15-foot-high artwork, it’s been a sorrowful status quo.

“I’m pretty depressed right now with the way this is all going,” Mason said.

Sleepless nights and health issues have haunted Mason since the start of the dispute and it only seems to be getting worse.

“My blood pressure’s been so high I had to go to the emergency room the other day,” Mason said. “It was over the stroke level and I was told to go by a nurse. She said, ‘You have to go now.’”

Since the public demonstration, petition, and subsequent community outcry, the only change on the city’s end has been to push back its deadline for Mason to respond to the city’s ultimatum.

Originally the city had asked for a voluntary compliance by Nov. 30.

A new deadline of Dec. 30 has been established for Mason to respond.

Public comment on the Raccoon Lodge will be accepted at the council’s meeting on Dec. 5.

The whimsical wooden facade, built to hide an eyesore of a Monterey cypress stump, is a new one for the city’s code enforcement efforts.

“It’s not something that we’ve really had to deal with before,” said Port Townsend Community Development Director Emma Bolin.

The five options the city has suggested include a permanent donation of the art piece to the city; a temporary donation of one to two years; having Mason purchase insurance for the structure; modifying it to meet code; or removing it entirely.

Bolin noted the city had offered options to keep the Raccoon Lodge in place.

“I’m pretty proud of our team, to take something that was pretty challenging but also come out the other side with some flexibility and ways forward that include keeping the structure in its entirety,” Bolin said.

Either permanently or temporarily donating the piece to the care of the city would save Mason the cost of insuring it, city officials said. But in order to do that, Mason would first have to pay for a building permit and have a registered engineer examine the lodge. Additionally, the structure could require modifications.

All of which have costs.

“My budget allows: I can tear it down. My budget doesn’t allow for engineering for the tree,” Mason said.

While almost 3,000 people have signed the petition to save the Raccoon Lodge, the city has said it will not pay for the engineering report.

On average, a structural engineer will charge between $100 to $200 per hour.

Insuring it privately has the same requirements for having the lodge reviewed by an engineer, as well as the cost of the insurance itself.

Another option would be to modify the structure to be in compliance of city regulations, which would mean shortening it by more than half.

That’s a choice, however, that Mason isn’t ready to accept.

“I would be willing to make certain adjustments or whatever to the structure, but as far as me totally changing the whole vibe of it? I built it with love, I built it for what I thought was art. I didn’t think they had a right to tell me what to do with my art,” Mason said.

On top of the engineering fees, Mason said he’s unable to draw up plans for a permit because of how unique the structure is. It’s a project that has evolved, he said.

“[The city] is equating this to ... going into a building or something, and adding on to it, or adding onto a flat wall,” Mason said. “I added that on organically, and because I have 50-plus years of experience. I know how I added that on. But you can’t draw up those kinds of things. You’ve got to organically adapt to what the surface is.”

He’s not worried about a piece of the lodge falling off and hitting someone on the sidewalk, a concern the city has repeatedly raised.

“I put big bolts on there into big, good wood. That’s enough.”

Mason is clear that he offered his art freely to the community, and that he does not want anyone else’s money, including fundraising. He only wants the ordeal to end.

“I wanted to give this to the community for free, but now that they want all this other stuff. They should pay it if they want to keep that structure,” he said. “Otherwise, I’m taking it down because that’s what I can afford.”

Appraisal for Short’s farm comes in lower than expected | UPDATE

Tax levies on ballot for both East Jefferson fire departments

Jefferson County Sheriff's Log | He could be dead, not sure