The Jefferson Community Foundation has been sharing the wealth for those in need for 15 years.

Now, the foundation is sharing something else, too: a bit of itself.

With much of the …

The Jefferson Community Foundation has been sharing the wealth for those in need for 15 years.

Now, the foundation is sharing something else, too: a bit of itself.

With much of the organization’s efforts in the past months devoted to distributing donations from the COVID Response & Recovery Fund — with more than $700,000 sent out to local nonprofits and community-serving government agencies — officials with the foundation have also been recently running a virtual campaign for the JCF Core Support Fund.

"This community is building this organization. It's only through the will of this community that we exist," said Siobhan Canty, president and CEO of the Jefferson Community Foundation.

There are more than 800 community foundations in the country and each one is little different. Jefferson Community Foundation is largely centered on grant facilitation; collecting and targeting donor funding and channeling grants to local nonprofits.

"It's not to necessarily make people more generous; we're so extraordinarily generous already," she said of the community. "We don't have to tell people to give; they're already giving."

Instead, it's the where: focusing community giving on where it will have the greatest impact possible.

The landscape can be daunting for someone wanting to make a donation to a local cause. There are more than 400 nonprofits in Jefferson County.

"And it may be hard for donors to navigate that," Canty said.

Jefferson Community Foundation also assists community members who want to work on specific issues, which include basic human needs in the community, affordable housing, and funding to assist women and girls in the county.

"It's about providing a community platform for working on the big issues," she said.

“The community foundation here can be your guide to have that right impact,” she explained. "Bringing people together to work on these issues is far more effective than hundreds of individual, disconnected gifts.”

"The COVID fund was a great example of that," she said.

The pandemic spurred a rapidly changing landscape, with many new needs becoming apparent at the same time. Many people wanted to help, but weren’t sure where best to give.

The foundation directed donations to a COVID response fund, then met with representatives of local nonprofits to get a sense of where gaps in funding existed and ways that grants could be targeted.

"In a time where people need really good news, this community is making good news happen through this organization," Canty noted.

The foundation started 15 years ago when a group of about 10 local residents who knew they wanted to think about the future of Jefferson County each put in $1,000 toward a locally based endowment.

When Canty joined the organization in 2017, the foundation had $1.85 million in assets.

Canty praised the community for their trust, their engagement, and their gifts.

"We want to thank everyone for making that possible," Canty said.

The foundation recently created testimonial videos from representatives from nonprofits that have been part of its network, and shared the series on social media as part of its online fundraiser for the JCF Core Support Fund.

“More people are aware of us, but they don't know fully what we do,” she explained.

“We want folks to know that we hold ourselves accountable to real impact in our community,” Canty added.

"We're trying to increase the awareness of the public so they understand how important it is to support the core operations. It allows for us to be out in the community, getting to know the nonprofits and the donors, and building community,” she said.

The capacity of the organization needs to expand, Canty said, so the foundation can continue to operate at such a high level of service and responsiveness.

"We have some big issues to work on together," she said.

At its start, the foundation was really based in on building an endowment for future years, she noted.

"While we feel like that's important, we feel it's equally important that we're getting as much money out the door for good use today,” she said.

"Our leadership, our grant-making, has really seen transformational change. And our organization itself has seen incremental growth,” Canty explained.

Even so, the size of the foundation’s staff has stayed the same: 2.5 positions.

Donations to the JCF Core Support Fund will help the foundation grow to keep pace with its outreach efforts.

Donations run the gamut from cash, to stocks, to real estate, to personal property.

Canty recalled a donor who had parents who recently passed away and left him a piece of art.

"It was a painting he didn't like very much," Canty said.

After some research, it was determined the artwork had been done by a well-know Japanese artist and was appraised at $30,000.

The foundation then explored with the donor what his parents would have imagined doing with such a gift.

“We came up with youth mental health as a place where we needed community support,” Canty said.

A youth mental health giving circle was convened, with representatives from local schools who helped determined how $30,000 could be channeled to support the mental health needs of local youth. The funding was directed to mental health counseling and training for teachers to better assist students in crisis.

"To have that youth mental health support now, obviously in a time of COVID, is so incredibly important,” Canty said.

"That's how we're going to keep growing; listening to what our community needs," she added.

The online fundraiser for the JCF Core Support Fund is set to wrap up later this month.

For more information on Jefferson Community Foundation and its core fundraiser, visit https://www.jcfgives.org/.

Commissioners vote to require all employees, visitors to wear masks in county buildings 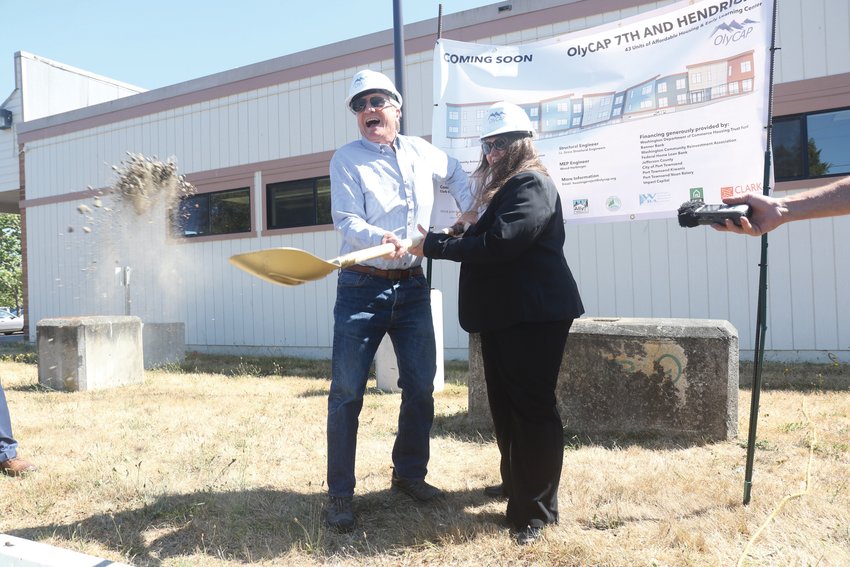 Advocates dig in on affordable housing project
Local and state politicians, housing advocates and members of the public gathered in a hot parking lot near the intersection of Seventh and Hendricks streets last Thursday to celebrate the …